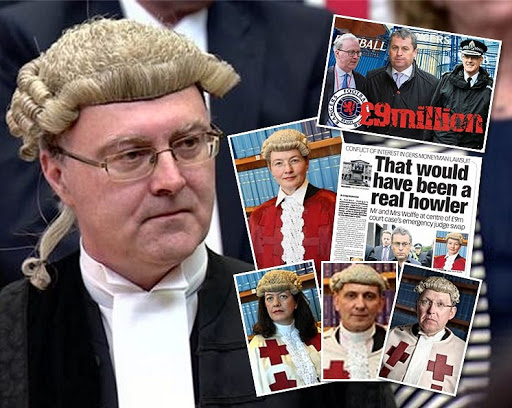 Lady Wolffe was set to hear court case against her own husband. SCOTLAND’S judiciary continue to face fresh allegations of concealing conflicts of interest after it emerged a multi million pound damages claim against the Lord Advocate and Scotland’s Chief Constable for wrongful arrest and financial damages – was set to be heard by the Lord Advocate’s wife – who is a judge in the Court of Session.

And, it has now emerged a series of judge swaps on this case, from Lady Sarah Wolffe, to Lady Morag Wise, then Lord Paul Arthurson – has led to a FOURTH judge – Lord Sidney Neil Brailsford – presiding over hearings in a case which could also decide the fate of the Lord Advocate’s immunity from legal action in cases of wrongful arrest.

The NINE million pound damages claim against Scotland’s top cop and top prosecutor was lodged in the final months of 2017 by David Whitehouse – a former administrator at Rangers FC – who is seeking financial damages from Police Scotland’s Philip Gormley and Lord Advocate James Wolffe QC.

However, it emerged at a hearing in November the Scottish Courts and Tribunals Service (SCTS) had quietly scheduled Lady Wolffe to preside over a crucial hearing in the case against her own husband – James Wolffe QC.

A copy of the Court Rolls handed to the media revealed Lady Sarah Wolffe QC – an outer house senator of the Court of Session – was scheduled to hear the case involving the claim involving the Lord Advocate – her own husband – A295/16 David Whitehouse (represented by Urquharts) v Liam Murphy &c (represented by Ledingham Chambers for SGLD – Scottish Government Legal Directorate) – on November 15 2017.

Prosecutor Liam Murphy  who is named in the action – is currently listed as a Crown Office Procurator Fiscal on “Specialist Casework”.

However, Lady Wolffe was removed from the hearing with no official comment from the Judicial Office.

Claims surfaced at the time Lady Wolffe was suddenly dropped from the case when it ‘emerged at the last minute’ her husband – Lord Advocate James Wolffe – was involved in the case.

A second Court of Session Judge – Lady Morag Wise QC – was then scheduled to hear the case.

For reasons which have not been fully explained, Lady Wise was also dropped from the hearing on Wednesday 15 November which saw the case handed to a third judge – Lord Paul Arthurson QC – who set dates for  a four day hearing of legal arguments.

However, when the £9m damages claim returned to court in mid December, yet another judge – Lord Sidney Neil Brailsford had been assigned to the case, replacing Lord Arthurson.

During a hearing at Edinburgh’s Court of Session on 14 December 2017, judge Lord Brailsford arranged for a debate on legal issues surrounding the case to take place over four days in May 2018.

Lord Brailsford said: “I acknowledge that this is a very serious litigation relating to matters of substance.”

The background to the civil damages claim stems from when David Whitehouse and Paul Clark were appointed to the former Rangers Football Club PLC in 2012 after owner Craig Whyte declared the business insolvent.

The Duff and Phelps administrators faced a failed prosecution bid by the Crown Office in relation to the collapse of the Ibrox oldco, while Mr Whyte was found not guilty of fraudulently acquiring the club during a trial in June.

The charges against David Whitehouse and his colleague Paul Clark were later dropped.

Yet questions remain on how the Crown Office acted in this case, and many others where prosecutions which ultimately collapse, appear to be based on flimsy or even non-existent or unprovable evidence.

Police arrested and charged Mr Whitehouse and Mr Clark during the investigation into businessman Craig Whyte’s takeover of the club in 2011. Charges were dropped following a court hearing before judge Lord Bannatyne in June 2016.

Lawyers acting for Mr Whitehouse claimed their client was “unlawfully detained” by detectives in November 2014. They also said that throughout the period of detention, there was no reasonable grounds to suspect that Mr Whitehouse had broken the law.

It is also claimed the actions of police and prosecutors are said to have damaged Mr Whitehouse’ reputation of being a first-class financial professional and led to a £1.75m loss in earnings.

The trail of judge swapping – leading to at least four judges who have now heard this case in the Court of Session, and the silent replacement of Lady Wolffe with Lady Wise, and then Lord Arthurson – continues to raise serious questions as to why there are no written references to any note of recusal made by Lady Wolffe in the Register of Recusals published by the Judicial Office.

Given the fact Lady Wolffe clearly holds a conflict of interest in the case – in which one of the core participants in the action is her own husband – the Lord Advocate – the public are entitled to see a note of recusal entered into the Register of Recusals referring to a case in which she was scheduled to hear and decide on legal action against her own husband.

Both the Judicial Office and Scottish Courts and Tribunals Service did not issue any comment prior to DOI’s report on developments in the case, which can be viewed here: CRY WOLFFE: Judicial Office hit with new conflict of interest claims as Court of Session papers reveal £9 million damages claim against Chief Constable & Lord Advocate James Wolffe QC was set to be heard by the Lord Advocate’s wife – Judge Lady Wolffe

Two days later, a spokesperson for the SCTS then said: “I can confirm that Lady Wolffe was assigned to hear procedural matters in a number of cases on Wednesday 15 November 2017. One of those cases was listed on the rolls as David Whitehouse v Liam Murphy and others. Subsequently, when the papers were checked for consideration, it became apparent that the Lord Advocate was the third defender and accordingly the case was reallocated to a different judge.”

When challenged for further comment and an explanation for the judge swapping which led to a third judge hearing the case, a second spokesperson for the SCTS claimed: “Hearings and callings of cases which are primarily procedural of nature are allocated to Judges depending on what other business they are dealing with. It is common for such allocations to be altered on the day by the Keeper’s Office on behalf of the Keeper of the Rolls to ensure the efficient handling of business.”

“As confirmed previously, Lady Wolffe was assigned to hear procedural matters in a number of cases on Wednesday 15 November 2017. One of those cases was listed on the rolls as David Whitehouse v Liam Murphy and others. Subsequently, when the papers were checked by the Keeper’s Office, it became apparent that the Lord Advocate was the third defender and accordingly steps were taken by the Keeper’s Office to reallocate the case to a different judge. The case was initially reallocated to Lady Wise but, having regard to the level of business and to ensure that all cases were dealt with on the day, was subsequently dealt with by Lord Arthurson.”

Pressed for an explanation on why no note of a recusal should be entered in the Register of Recusals, a THIRD spokesperson for the SCTS claimed: “In this instance no note in the register of recusals is required as the case was administratively reallocated prior the case calling in court, in order to avoid unnecessary delay to the parties. Notes in the register of recusals relate only to formal motions for recusals – where an issue arises on which the judge requires to consider whether to decline jurisdiction, and the decision being formally recorded.”

Since the last hearing in the case on 15 December 2017, legal insiders have poured scorn on explanations offered by the Scottish Courts over decisions taken which would have seen the Lord Advocate’s own wife hear and rule on the court case involving her own husband.

Sources have since claimed there was ‘no mistake’ involved in the selection of Lady Wolffe for the hearing in November.

“It is therefore ridiculous for anyone to claim the Keeper’s Office or anyone else within the Judicial Office or courts is unaware of Lady Wolffe’s status as the wife of Lord Advocate James Wolffe”.

A former Rangers administrator’s £9million lawsuit against Lord Advocate James Wolffe was given an emergency judge swap – after it emerged the case was originally handed to his wife.

Court officials had to draft in a replacement judge when they realised Wolffe’s wife Lady Sarah Wolffe was scheduled to sit on the bench for a procedural hearing at the Court of Session in Edinburgh last month.

The late switch from Lady Wolffe was ordered after the conflict was discovered.

Lady Morag Wise was asked to take her place, although the hearing eventually went ahead in front of Lord Paul Arthurson.

Yet another judge, Lord Neil Brailsford, was on the bench when the case was called again earlier this month. It is scheduled to go ahead next year.

The removal of Lady Wolffe is not noted in the official list of judicial recusals – where a judge declines jurisdiction – as it was reallocated before it was called in court.

A Scottish courts spokesman said: “Lady Wolffe was assigned to hear procedural matters in a number of cases on November 15.

“One of those cases was listed on the court rolls as David Whitehouse v Liam Murphy and others.

“Subsequently, when the papers were checked by the Keeper’s office, it became apparent the Lord Advocate was the third defender and, accordingly, the case was reallocated to a different judge.

“The case was initially reallocated to Lady Wise but, having regard to the level of business and in order to avoid unnecessary delay to the parties, was ultimately dealt with by Lord Arthurson.”

Whitehouse and colleague Paul Clark were arrested during the Rangers probe but charges against the pair were later dropped.

They worked for Duff & Phelps, who were appointed as administrators of the club in February 2012. The business and assets of The Rangers Football Club plc, who entered liquidation later that year, were sold to a consortium led by Charles Green for £5.5million.

Police launched an investigation into the circumstances surrounding the takeover. Whyte was cleared of fraud by a jury at the High Court in Glasgow in June.

Lawyers acting for Whitehouse claimed their client was “unlawfully detained” by detectives in November 2014. They also said that, throughout the period of detention, there were no reasonable grounds to suspect he had broken the law.

Whitehouse claims police and prosecutors didn’t follow correct legal procedure and his arrest damaged his reputation and caused him significant loss of income.

The defenders in the action, including the chief constable and Lord Advocate, claim correct legal procedure was followed and want his case to be dismissed.