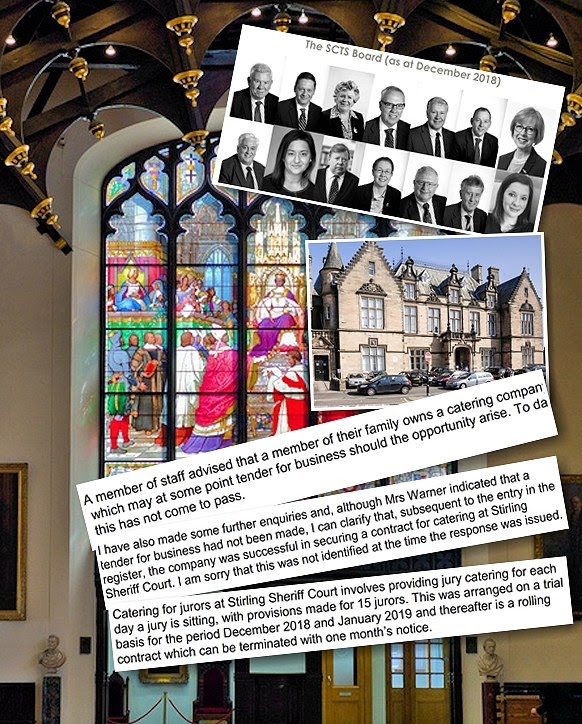 Court employee links to jury catering contract. QUESTIONS over the accuracy of a Register of Interests for employees of the Scottish Courts and Tribunals Service (SCTS) have emerged – after a member of staff’s link to a catering contract to provide food to jurors at one Sheriff court – was concealed from a Freedom of Information disclosure.

The lack of information in the SCTS register of staff interests, and failure to disclose court employees links to the award of a successful rolling catering contract – providing £13,000 of catering and food to jurors at Stirling Sheriff Court – was only admitted by the Court service – after a series of FOI requests established contracts were being handed out to companies linked to court employees.

Some weeks ago, questions were put to the Scottish Courts and Tribunals Service in the form of an FOI request – after information was provided to the media suggesting significant failures of court employees to declare profitable interests linked to contracts providing services to the courts and judiciary in Scotland.

For some context on this – the probe on court staff failing to declare links to money making contracts providing services to the courts, came about during additional scrutiny of how law firms & some court staff are using hospitality to earn ‘referral fees’, employment for relatives and other financial favours linked to criminal defence law firms poaching each other’s clients.

In response to the Freedom of Information enquiry, Gillian Warner of the Scottish Courts & Tribunals Service issued a disclosure with one single declaration, stating the following:

A member of staff advised that a member of their family owns a catering company which may at some point tender for business should the opportunity arise. To date this has not come to pass.

A request for a Freedom of Information review was submitted – and in response to that review – the SCTS were forced to reveal the contract for providing food to juries at Stirling Sheriff Court – was successful and had been awarded – despite the earlier claim that the contract had not been awarded. 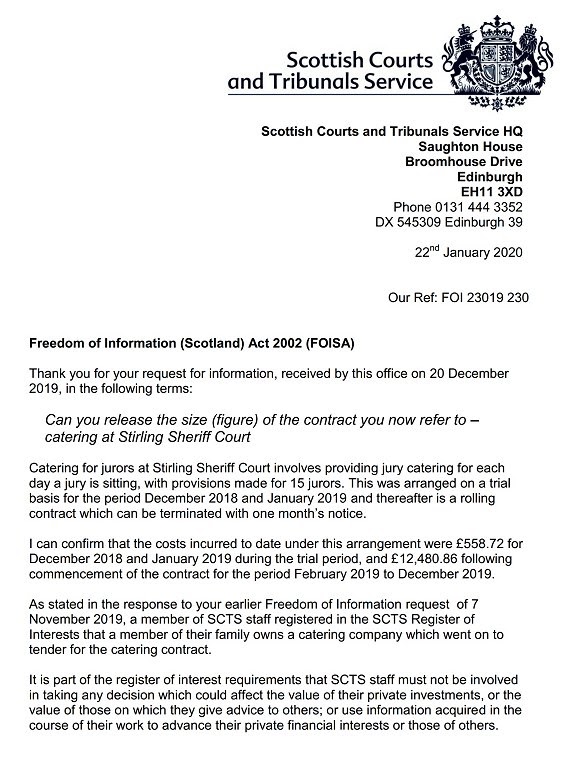 Files reveal SCTS failure to disclose staff links to contracts. Margo Mackie, Deputy Head Information Governance & Correspondence said: “I have also made some further enquiries and, although Mrs Warner indicated that a tender for business had not been made, I can clarify that, subsequent to the entry in the register, the company was successful in securing a contract for catering at Stirling Sheriff Court. I am sorry that this was not identified at the time the response was issued.”

Ms Mackie added further detail in the FOI review with the entry as was declared in the SCTS staff register: “The company services a sports club in Stirling and provides outside catering for local companies for functions etc. There are no expected conflicts of interest here however, should a tendering exercise take place for any catering requirements within the Stirling area, it is quite possible that the company would attempt to secure that business. No specific additional steps identified or taken to mitigate any risk at this stage.”

However, when asked about the value of the contract and how long it had been running – the Court Service insisted a new Freedom of Information request must be submitted – which allowed the SCTS an extra twenty days for a response to be given.

It then emerged from the response to the new FOI request that the £13K rolling contract for catering – had been operational for at least a year – despite earlier claims from the Scottish Courts & Tribunals Service that no such contract existed.

In response ot the second FOI request, Margo Mackie – Deputy Head Information Governance admitted: “Catering for jurors at Stirling Sheriff Court involves providing jury catering for each day a jury is sitting, with provisions made for 15 jurors. This was arranged on a trial basis for the period December 2018 and January 2019 and thereafter is a rolling contract which can be terminated with one month’s notice.”

However, while elected politicians such as MSPs & MPs, and those in other public bodies such as Police Scotland are required to declare all their interests, a significant failing in in how employees of the Scottish Courts and Tribunals Service declare their interests has emerged – where Court staff are only required to declare interests they feel may be relevant, rather than a requirement for total disclosure.

A question was put to the SCTS, asking whether entries are only made in this SCTS staff register if a staff member feels they may have an interest to declare – rather than a full and comprehensive register of staff interests – per SCTS staff member – being kept and updated as appropriate – example the register of interests for Scottish Parliament MSPs.

In response, Margo Mackie – Deputy Head Information Governance stated: As regards your first point I can advise that SCTS follows the Civil Service Management Code which sets out regulations and instructions regarding the terms and conditions of service of civil servants. One of these regulations concerns “the declaration of relevant business interests which SCTS employees or members of their immediate family hold, which might compromise, or appear to compromise, their integrity, honesty, objectivity or impartiality”.

“SCTS staff are therefore required to declare any business interests (including directorships) or holdings of shares or other securities which they or members of their immediate family (spouse, including partner where relevant, and children) hold, to the extent which they are aware of them, which they would be able to further as a result of their official position.”

“This means that, where there is a potential for income or financial benefit to be gained from work related to the SCTS, staff must declare and register an interest. Such interests are declared by informing their Unit Head who considers whether the interest is appropriate and should be registered. Thereafter details are provided to Human Resources Unit for addition to the SCTS Register of Interests.Staff who do not declare and register an interest which subsequently comes to light may be subject to disciplinary action.”

After initially concealing information from a Freedom of Information request, admitting further details in a review, and then insisting on a second FOI request, the Scottish Courts & Tribunal Service claimed the member of staff had no part or involvement in procurement.

Margo Mackie Deputy Head Information Governance & Correspondence claimed: “It has been confirmed that the member of staff concerned is not involved in procurement and played no part in the quotes exercise which awarded the contract, nor do they have any active involvement in the running of the company.”

Margo Mackie added: “The matter of updating information contained in the register will be considered in future reviews of the procedures.”

However, no explanation has been given as to why the member of staff’s link to the successful contract was concealed from the initial Freedom of Information disclosure. 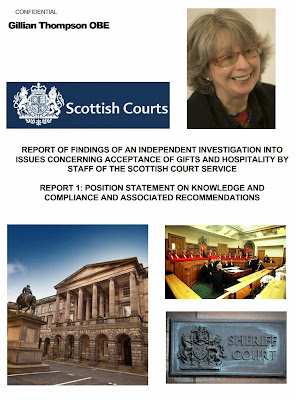 Report said SCS Registers insufficient, Court staff involved in private gains failed to declare. Former Judicial Complaints Reviewer Gillian Thompson’s Report on Hospitality & Gifts in the SCS stated:  “The information currently captured on the registers is insufficient to provide assurance that staff are using their common sense and considering issues such as conflict of interest.

Ms Thompson went on to recommend the “SCS should revise the Policy on Acceptance of Gifts, Rewards and Hospitality to ensure that it is fit for purpose for all staff, taking account of the various roles performed within SCS. It may also be time to revisit the levels of value for gifts and hospitality.”

The former AIB’s report also revealed court staff were using their positions to earn money privately from their links with lawyers and law firms operating in courts, stating “Several staff raised the issue of sheriff clerks who carry out extrajudicial taxations and private assessments and who personally benefit financially from these activities.”

Ms Thompson’s report roundly condemned this practice, stating: “Not only is it inappropriate in terms of the civil service code requirements for staff who are public servants to be able to receive private gain from their employment it is also highly divisive when other staff see such benefits being derived from simply being in the right post of Auditor of Court within the Sheriff Courts.”

Ms Thompson recommended in her report the “SCS should bring the practice of sheriff clerks profiting privately from their employment by SCS to an end as quickly as possible”.

Now, a number of additional claims by whistleblowers regarding undisclosed links between SCTS staff and high value contracts providing services to the courts are currently being examined by DOJ for further investigation and publication at a later date.

Readers should note the Scottish Parliament’s Justice Committee are currently considering an eight year cross party backed petition calling for a Register of Interests for members of Scotland’s judiciary.

Previous articles on the lack of transparency within Scotland’s judiciary, investigations by Diary of Injustice including reports from the media, and video footage of debates at the Scottish Parliament’s Public Petitions Committee can be found here : A Register of Interests for Scotland’s Judiciary.