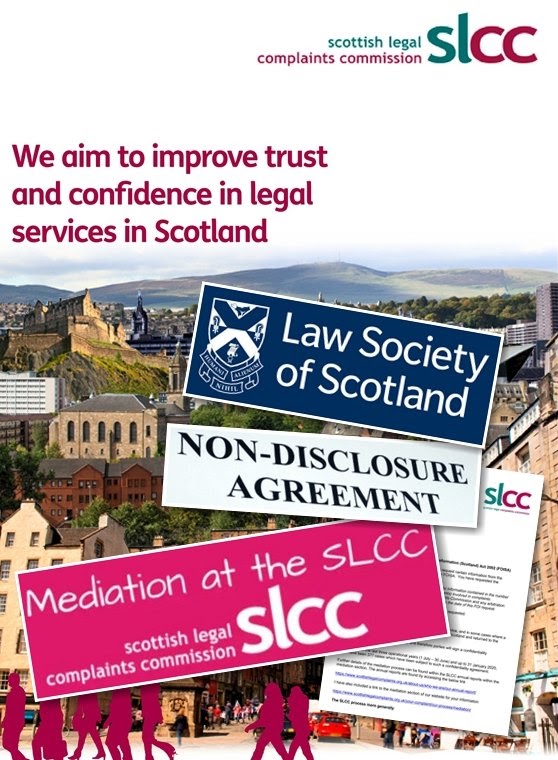 And, amid renewed media interest in continuing pro-lawyer bias in the regulation of Scotland’s legal sector – data obtained from the SLCC now reveals pittance levels of compensation paid out to thousands of financially ruined clients – amounting to less than £963,000 over TWELVE years.

Evidence has also emerged that corrupt Scots law firms are using the same Non Disclosure Agreements used by corrupt businessmen and jailed ex-Holyrood moguls such as Harvey Weinstein to buy secrecy from financial scandal which could impact on their business reputation & brand.

Cases brought to the attention of the media indicate several well known law firms, and even High Street solicitors have forced financially ruined clients into accepting pitiful amounts of compensation – while imposing strict secrecy agreements to ensure the details of financial scandals and identity of the law firm will never be revealed.

In response to a Freedom of Information request – the Scottish Legal Complaints Commission admitted at least 377 cases of serious complaints against Scottish lawyers in ONLY three years – were subject to conditions of strict secrecy agreements between mediators, law firms and clients who eventually signed up to Non Disclosure Agreements (NDAs).

The cost of funding the Scottish Legal Complaints Commission comes from a general complaints levy – which is funded by legal fees taken from clients.

After the funds are collected from clients, the levy is then is paid to the SLCC by all practising solicitors, advocates, QCs and other legal representatives in Scotland.

A further sum of at least £2million in public cash was paid to the SLCC by the Scottish Government in 2008-2009  – making a total income of around £29,812,965 since the legal regulator began investigating complains against rogue lawyers some twelve years ago.

The response added: “This figure includes compensation awarded for inconvenience and distress and compensation for actual loss.”

The SLCC stated in it’s FOI disclosure: “Whilst the SLCC does not record the actual sums paid, we do record where we are notified that compensation is not paid. This figure is currently £41,516.89.”

Additionally, new data recovered via a Freedom of Information request reveals at least 377 cases of serious complaints brought against Scottish lawyers in the past three years – were subject to conditions of secrecy agreements between mediators, law firms and clients who signed up to Non Disclosure Agreements (NDAs) 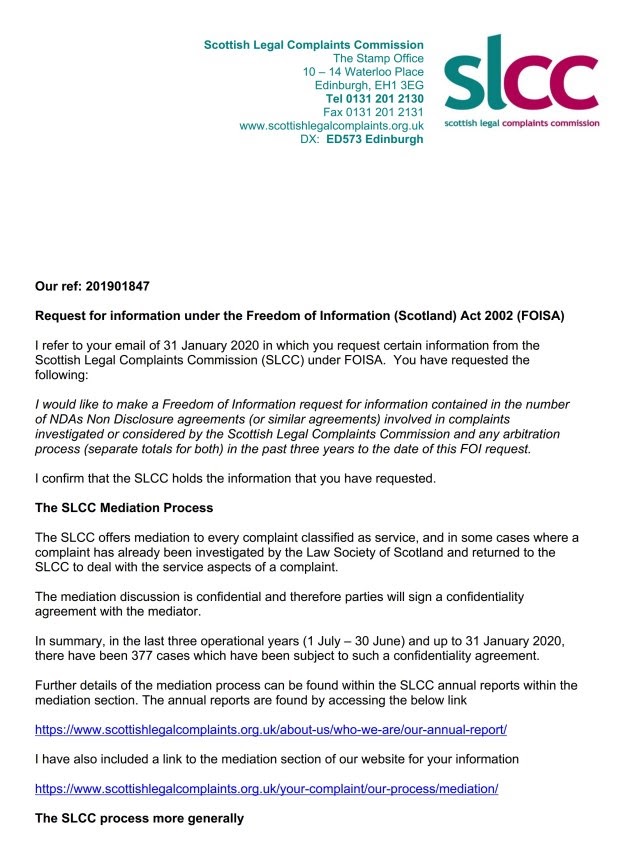 On the subject of Non Disclosure Agreements between clients, and their solicitors and law firms who were the subject of complaints – the SLCC stated: “In summary, in the last three operational years (1 July – 30 June) and up to 31 January 2020,
there have been 377 cases which have been subject to such a confidentiality agreement.”

“The SLCC process allows parties to a complaint to resolve matters between themselves at any
point prior to a Final Determination being issued by the SLCC so it possible that such
agreements could be negotiated between parties out with our process to resolve a complaint.”

“It is not within the powers of the SLCC to recommend a NDA or similar as part of a resolution to
a complaint and the SLCC would not enter into such agreements to settle a complaint.”

“This information is provided to the SLCC as part of an informal resolution, and the parties to the
complaints are under no obligation to provide us with such information. Therefore it would not
be recorded in a readily accessible way on the SLCC system. I am unable to provide you with
exact figures in respect of these types of Non-Disclosure Agreements.”

“There have been approximately 2 instances of such agreements being recorded against
complaints settled out with the SLCC process within the last three years to the date of this FOI
request.”

While the SLCC does not itself pay compensation to clients – many of whom have suffered life changing and enormous financial losses at the hands of their own legal representatives – the legal regulator does order law firms to pay compensation and other payments to complainants.

However, in just a small snapshot of cases looked at by journalists – where solicitors helped themselves to their client’s assets, emptied bank accounts, appropriated land titles and property from deceased estates & fleeced millions of pounds from clients in investment scams – there are clear indications the current system to compensate for actual and quantifiable financial losses is still heavily weighted in the solicitor’s favour.

In some instances – the Scottish Legal Complaints Commission, Faculty of Advocates and Law Society of Scotland have clearly, and continually turned a blind eye to multi million pound losses attributed to clear, and documented examples of dishonesty & negligence on the part of legal representatives.

However – Diary of Justice has recently been approached by several clients who were forced to register complaints to the Scottish Legal Complaints Commission after losing considerable sums to rogue solicitors and several well known Scots law firms.

Once complaints were filed with the legal regulator, several clients alleged they felt that they were being intimidated into the mediation process – and forced to accept outcomes and settlements far short of their expectations or actual financial losses.

Some clients who entered the SLCC’s mediation process have also alleged they were denied the right to seek independent advice on mediation and settlement offers – which in some cases were time barred to ensure clients were forced to accept little or nothing in return for – in some cases – hundreds of thousands of pounds in actual financial losses.

The Scottish Legal Complaints Commission has so far not listed actual financial losses or financial losses quantified by clients in any statement from it’s creation in 2008 to publication of this article.

In response to queries from a DOJ journalist, the Scottish Legal Complaints Commission released a copy of their Agreement to Mediate.

The Agreement to Mediate – contains contains numerous conditions, including strict terms of confidentiality – for mediation to occur between clients, mediators & lawyers accused of wrongdoing. 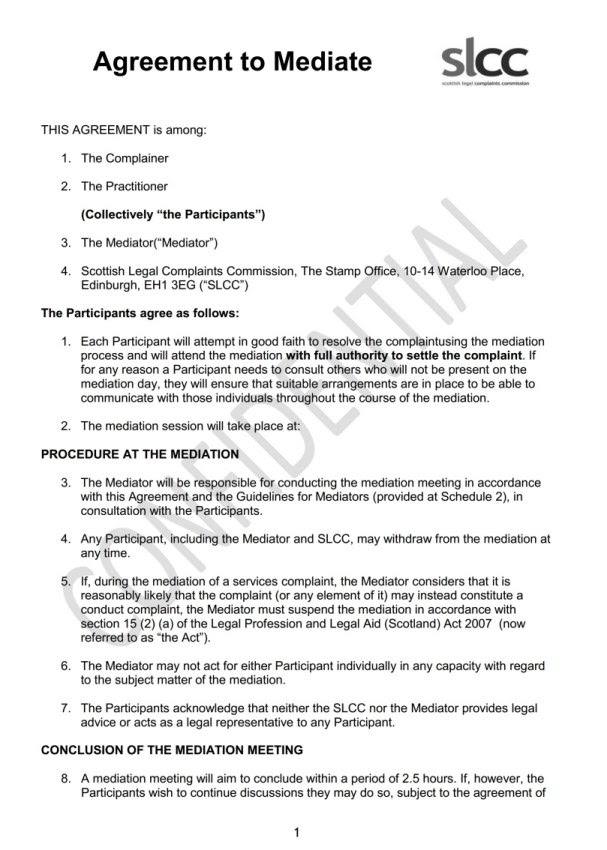 On the issue of Settlements, the SLCC’s Agreement to Mediate states the following:

12. In the event that the Settlement involve actions by one Participant over a period of time, the other Participant will inform the SLCC’s Mediation Co-ordinator when all terms have been met.

13. In the event that a Participant does not fulfil the terms of the Settlement Agreement, the other Participant:

a) may be released from the Settlement terms if they so wish, by giving written notice to that effect to the other Participant; and

b) shall inform the SLCC of the failure to fulfil the terms of the Settlement Agreement.

14. All Participants to the dispute reserve their respective rights should a Settlement not be reached through mediation.

15. The Participants, the Mediator and the SLCC agree that the discussions at mediation will be kept confidential, including the terms of any settlement Agreement.

This paragraph shall not apply where:

i) The Participants consent to specific disclosure;

ii) Disclosure is necessary to implement and enforce the Settlement Agreement;

iii) The Participants are, or any other person is, required by law to make disclosure;

iv) The Mediator reasonably considers that there is serious risk to the safety of any person if the Mediator does not make such a disclosure;

v) There is any allegation of a breach of the Settlement Agreement and disclosure is required for the purposes of taking further action.

17. In the event of breach of the obligations contained in paragraph 15 of this Agreement by any Participant, the Mediators, the SLCC and the Participant(s) who have not caused the breach shall no longer be bound by the terms of this paragraph but their rights to take further action in respect of any such breach of this Agreement shall be preserved.

18. Neither Participant may have access to the Mediator’s notes nor SLCC Mediator Review Form nor call the Mediator nor the SLCCas a witness in any proceedings related to any of the issues between them. The Mediator’s opinion will be inadmissible in any subsequent proceedings, which may take place between the Participants concerning the subject matter of the mediation.

The SLCC Agreement to Mediate also contains a key section which removes any liability from mediators should they be considered to have acted negligently or omit to consider issues within the scope of the mediation.

20. Neither the SLCC nor any Mediator, nor any body with whom the Mediator is professionally associated, shall be liable to the Participants for any act or omission, whether negligently or otherwise, in connection with the performance or purported performance of any of the services provided by them or the obligations arising under this Agreement. This Agreement may be produced and relied upon as a defence to any claim made by a Participant against the SLCC, any mediator or body with whom the Mediator is professionally associated.

Commenting on issues relating to mediation, a spokesperson for the SLCC provided the following statement: “We know that mediation is an unfamiliar process for some parties, but our experience is that, once people take part, it has very high resolution rates, receives higher customer satisfaction scores from both lawyers and complainers, and is more efficient. It allows both parties to take control of the outcome of the complaint, and find an agreed solution that resolves the complaint to both parties’ satisfaction, is often quicker than a full investigation, and is less costly to administer.”

“Of course, not all cases will be suitable for mediation, and mediation only proceeds where both parties agree to attend. Where mediation does not help parties reach an agreed outcome, or where it is not appropriate, cases progress to investigation.”

“We do ask for feedback from everyone who takes part in mediation, and we use this to take action on any concerns raised, and to consider what improvements we might be able to make to our processes.”

These figures are from our last annual report year (2018-19): Outcomes at mediation: Before we start investigating a service complaint, we give the complainer and the lawyer or firm an opportunity to attend a mediation meeting, led by an independent external mediator.

Number of complaints resolved by mediation: 65

Agreed to mediation when offered: 39% (both parties need to agree to participate for mediation to proceed – if one party does not wish mediation then the matter is progressed to investigation instead)

Mediation was successful: 71% (mediation does have a high success rate in delivering agreed outcomes, but in 29% of cases parties either did not reach or accept an outcome, which they are entitled to do, and so the case proceeded to formal investigation and, if required, determination).

We have a page on our public facing website devoted to mediation (https://www.scottishlegalcomplaints.org.uk/your-complaint/our-process/mediation/), which explains the process for both complainers and lawyers, and includes an information booklet and a video featuring some of our mediators, to help people understand what mediation is and how it might help them to reach a consensual resolution.”

“The Legal Profession and Legal Aid (Scotland) Act 2007 provides that the SLCC may offer mediation as way of resolving service complaints.  This is set out in section 8 of the Act. The objective of mediation is to enable the parties to resolve the service issues complained about quickly, if they choose.

Mediation can be offered at any stage after a service issue is deemed an eligible complaint (mediation is not considered appropriate where there is an eligible conduct issue to be investigated).  It is voluntary, and requires the acceptance of both parties. Mediation is a confidential process which gives the complainer and the firm the opportunity to meet together with an independent third-party so they can both decide how to sort out the service complaint.  The mediator is a neutral person who helps them talk through the problem to see if they can agree a fair and reasonable solution.

Previous media investigations, reports and coverage of issues relating to the SLCC can be found here: Scottish Legal Complaints Commission – A history of pro-lawyer regulation.